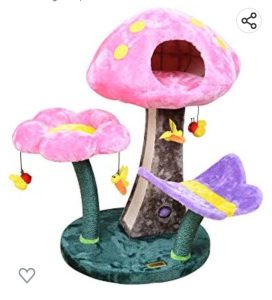 I bought a cute small cat tree on the Black Friday sales on Amazon last year.  It was a mushroom, a butterfly and a flower, with the primary color being pink. I thought kittens would love it!

When it came, I put it together. It was relatively sturdy for the price and size. What I never noticed was a small hole at the base of the mushroom near the floor.  It had a dangle toy for cats to reach in and play with. I had it almost a year and never paid attention to it. 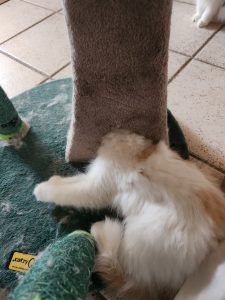 That changed today after I got up and went downstairs to start the process of cleaning litter boxes and feeding cats. I could hear a kitten crying. It was muted like in a closet. So I looked around and realized thirteen week old Twinky was missing. I went upstairs following the sound. No kitten in closets. And then I saw him. Poor Twinky’s head was stuck in the hole of that awful  tree. I reached down and attempted to move him around to get his head out. No luck. I moved the tree (and the kitten out of the corner for better access. For an inexpensive tree, the base was really thick. I worked trying to manipulate the head of the exhausted kitten for extraction. I considered tools that I had. Nothing that I felt would help.

I considered taking the tree with the kitten attached to the local fire department thinking they would have tools to manage this. But, the fire departments here are volunteer. There would be no one there in the am. So, I did the next best thing. I called my friend Fred for help. He brought a plethora of tools to take apart the mushroom ‘s stem.  I had removed the butterfly, flower and everything else I could. He managed to get the scratching panel off while I held the kitten steady as Twinky was panicked due to the noise. Once that was off, I had access to the inside of the base with my hand and after liberally applying more dish soap, was able to manipulate his head out.

The poor kitten was stressed and exhausted. I wrapped Twinky in a towel at first to settle down and then put him in the sink to rinse off the dish soap. After towel drying him I put him in the bathroom with the heat up to warm him up. He slept in there all afternoon. Tonight, he seems back to himself with the exception of a winky eye from the dish soap.

I knew a breeder friend of mine had the same tree, so I let her know and went on Amazon to review the tree, complete with a photo of the tree with the kitten’s head stuck in the hole.