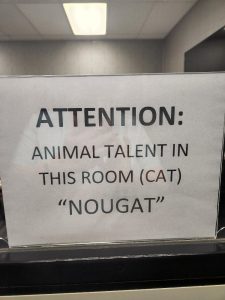 It’s been a while since RagaMuffin Nougat had a job. Actually, he hasn’t worked since before COVID hit. But, that changed last week. The animal talent agent emailed. It was a day both Nougat and I were available ( honestly, his schedule is pretty flexible). So, on his behalf, I accepted the work. Nougat  got a gig for a photo shoot.

Two days prior to the shoot, Nougat got a bath and blow dry so he would be pristine for the camera. He hadn’t had one for quite a while, but handled it like the pro he has always been. I’m sure he wondered what was coming.

The really good news is that the studio was down in Lancaster County. No driving to eastern New Jersey or New York City. Last week, I tucked him into his crate for the drive down to the enormous studio built in the middle of a corn field.

As stated previously, it’s been a while since Nougat has been on a job or to a show. The only car ride he has been on was to have dental work done last year. All was going well until about half way there, Nougat shifted around in his crate, let out a cry and….well, he had had an accident. I pulled over to clean up the crate so he would be comfortable and prevent his fur from being soiled.

We arrived with time to spare. I had been told by Nougat’s agent to go into the door on the right where the offices were and ask for Amy. Instead of Amy, I got Emma, who kindly escorted Nougat and I to the client lounge which was to be our “green room” for the day. Emma explained that since most of the building was not air conditioned, that they put Nougat in the well air conditioned room to ensure his comfort. She also told me that when Nougat was on set, if I felt he was hot, that the portable AC units would be adjusted to make it cooler for him.

The client lounge had a large sign placed on the door notifying all that walked by or desired entrance that the ANIMAL TALENT was inside, that he was a cat named Nougat. Nougat and I had a carpeted floor, TV with remote, couches and chairs, a table, ice machine, coffee maker, snacks and refrigerator full of water. We had it made. The rest of the people, human talent, stylists, makeup artists,  producers, cameramen, etc, were sweating to death in front of fans elsewhere.

I set up Nougat’s tent, litter box, snack food and water. I let him roam the room which he did. I did utilize the tent when I had to leave the room. I did not want him loose unsupervised. I combed him out to get ready for the first photo session. After all, he had to look his best. The first shoot was in a set that was sort of a den area with a “father” and “child” present. Everyone on set was thrilled to meet Nougat. I was told to put him on the table initially while the models played a game of Jenga. Inside, I am hoping that Nougat complies, thinking, he hasn’t done anything in quite a while. Maybe he will. Maybe he won’t. But, Nougat was amazing. I petted him and he sat down to look at all the people looking at him. Meanwhile the human models continue to play Jenga. I was prepared in case the wooden blocks came down and Nougat was startled and decided to make a run for it. The blocks did come down right next to Nougat, but he seemed to hardly notice. That’s my boy! He had other shots on that set, some being petted by the child, others looking out the window, or walking on the window ledge.

After maybe 20 minutes, we went back to his “room”. He had a snack and took a break. People started coming in to meet him and take his picture. He obliged. After an extended period of time. We were escorted to another set which was a kitchen. I transported him to the sets in his crate and took him out once we were there. As we arrived at the second set, people said, “here comes the star!”. Again Nougat was very cooperative. He did take a bit of a walk and ended up inside the false kitchen island. Oh, well. I crawled inside to retrieve him and place him on  the bench that he was to be on. He did very well looking out the window, with the help of a stagehand tapping on it. On this set, he worked with the “mother” of the family.

Again, we were sent back to our private room. He napped and I watched TV. For the last set, we were taken to an office type area, again to work with the “mother”. He was photographed on the desk, in the chair and in the lovely model’s arms. He did his job well. At that point it was almost 5 pm and time to wrap it up. I packed up all his things and put him in his crate for the ride home.

Nougat was exhausted once we got home. He went straight out to the cat yard and curled up under the hosta to sleep. We had a good day. The entire team could not have been more thoughtful. Nougat’s comfort at all times was most important. I was proud of Nougat for doing the all that was asked of him. Now he is back to being his regular self. 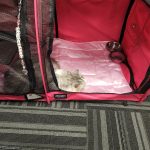 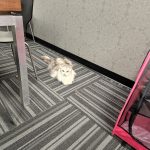 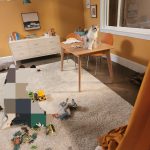 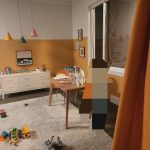 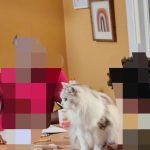 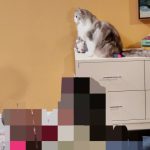 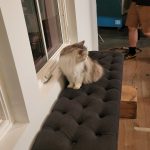 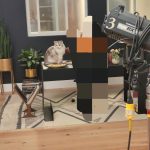 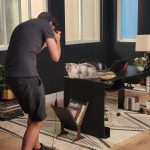 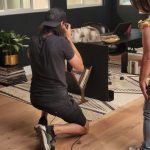 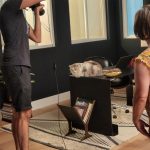 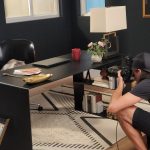