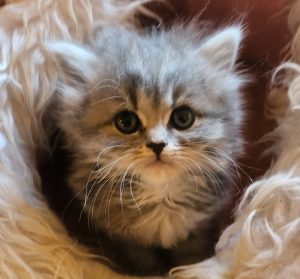 I got up one morning and proceeded to do my chores as usual. First things include letting the dog out, feeding the dog, and then going through the house feeding cats and scooping boxes. When I got to the nursery upstairs, I noticed right away that Gertrude’s solo kitten was not up in her play pen meowing to greet me.

As I got closer, I could see a lump of gray fur that was not responding to my voice. I picked her up and she was cold and limp. I was shocked. She was fine the night before. It appeared she had not eaten overnight, but had a loose stool. She was not interested in food or petting.

At 5 weeks of age, I don’t usually have accessory heat sources with kittens, especially during the summer. I put a special heat pad in with her. I finished my immediate chores and went back in to see what I could  do.

She was cold…I had added the heat source. She was dehydrated. I gave her subcutaneous fluids. I started an antibiotic and gave her a couple more injections to help build her strength. She did not look good at all.

I checked on her again after doing my barn chores. No improvement. I realized it could be too soon yet for the medications to work, but was hoping the fluids and heat would help.

After another check, I made a phone call to a friend in veterinary practice near me. As a veterinarian with many years experience, I still look for help and another opinion at times, especially with my own animals. This wise doctor felt a dose of steroids may help as she appeared to be in shock and, frankly, I had nothing to lose. I drove to her practice to pick up the injection, drove back home and administered it.

Next check, no change. I was trying to get some little pieces of canned food into her, but had no success as the kitten would just spit them back out. I continued to check on her and try to get her to eat some food. Finally, in the evening, instead of rejecting the food, she ate it. I was thrilled. I gave her several tiny meatballs. At late dinner time, I took her canned food in on a plate and she put her head in and started eating. She had rounded the turn. Whew.

To be honest, I thought she was going to die, most likely from some virus or sepsis of unknown origin. I knew she could not have gotten hurt, no signs of an abscess, and clearly went downhill quickly. I am so relieved she is better. But, what would I have done if she HAD died?  That adorable kitten would have been sent for a necropsy to determine the cause of death.

As a breeder, I am accountable for more than one kitten. A house full of cats depends on me for their health and happiness.  As unpleasant the thought was, it would have been very important for me to know what happened. There are experts at universities that are able to determine a cause of death when unknown and a responsible breeder has an obligation to pursue this information.