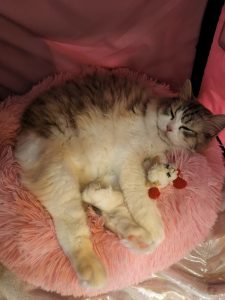 Last Friday I hit the road in a packed vehicle with RagaMuffin iCandy  Raisinette. It was the annual trip to the CFA North Atlantic Regional cat show and banquet. Believe me when I say it is a big deal in the cat world. First, the show is amazing. The decorations and rosettes are always jaw dropping gorgeous. And the banquet is just as glamorous, with the cat friends dressed up in their finery and awesome decor.

This year’s event was held at a Sheraton Hotel in Springfield, Massachusetts. I got there with relatively little problems on the road. Once at the hotel, I managed to find a large enough space in the underground garage for my Tahoe. I loaded up my rolling cart with cat in carrier, cat show “stuff” and my personal weekend necessities. After checking in, I headed up to my room to settle Raisinette in with food, water and carrier. She is an experienced traveler, so I was comfortable leaving her to go downstairs to set up my space in the show hall.

As soon as I entered the hall, I was gobsmacked by the amazing decorations a dedicated crew was working on. I knew the theme was Candyland, which already had me excited as my cattery name is iCandy. The room was full of pink….which anybody who knows me, knows I LOVE pink!  And there were decorative sweets, including candy  and cakes EVERYWHERE. It was awe inspiring!

After setting up my area for the show, I turned to the very talented people hustling to put together  the ring decorations. I offered my help. As my talent is limited, I didn’t want to get in the way. The extent of my help turned into being the battery holder. Whenever someone needed batteries for lights that were being strung, they could simply call out for them and I’d deliver. Not exactly a momentous contribution, but, at least I didn’t mess anything up.

The next morning the show started. Watching people walk in the door and seeing the expressions on their faces as they saw the fantastic room for the first time was delightful! The competition started and Raisinette did not disappoint. I figured out early on that she was coming into heat. Oh boy! But, that can happen when showing a Grand Champion as in this division, the cats are not spayed or neutered.  In addition to Raisinette, another iCandy kitty, Hob Nobs, owned by friend Michelle of Belcanto Cats was entered. Both RagaMuffins did very well with Rasinette finaling under every judge and Hob Nobs finally under three of the four judges. The biggest surprise was in the Long Hair Specialty ring. Hob Nobs got best kitten and Raisinette got best in championship class!

Saturday night was the awards banquet. People left the show hall and went to clean the cat hair off and dress in cocktail attire. Meeting once again downstairs, we were ushered into a large banquet room with simply magnificent centerpieces on each table. After dinner, the annual awards were given out. The winning cat’s picture was displayed on a large screen as the individual cat was announced along with the name of the owner and breeder. I went up on stage twice, once for my Pixi Stix’s Regional Win in Championship and then again for Raisinette’s Regional Win in Kitten class. Michelle’s Hob Nobs got a Regional Win in agility!

Overnight, Raisinette’s heat cycle ramped up. If you have ever heard a cat yowl at the top of her lungs in a hotel, you were probably not thrilled. I begged her to use her inside voice, but not much changed. Fortunately, it was all pretty much cat people on the floor, so I hope they understood. The morning brought a continuation of the show. Raisinette did very well, again finaling under every judge despite her unladylike behavior. Hob Nobs also had a good day.

At the completion of the show, I stayed to help take down all those wonderful decorations. Since many fit the theme of my cattery, I was fortunate to rescue many of the items from the dumpster. The next day, I brought home a ton of decorations as well as giving a ride to some regional belongings as I could fit them in my car. There wasn’t much space left, but sometimes it pays to have a big car.

It was a wonderful weekend with friends and cats. The regional show is always special and something I look forward to. Regional Awards for a breeder are a goal to work toward. Already looking forward to next years event! 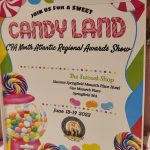 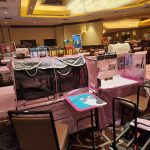 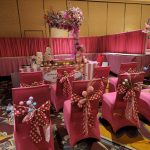 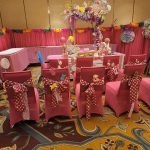 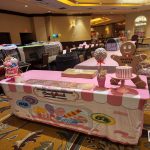 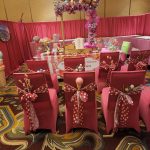 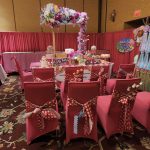 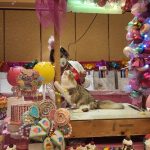 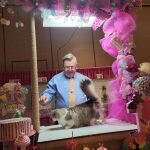 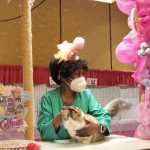 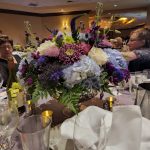 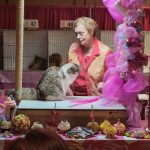 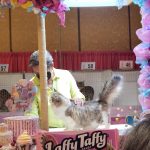 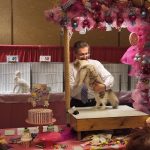 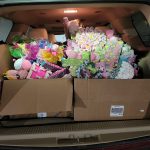 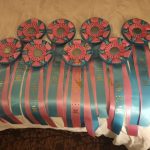 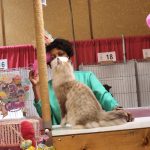 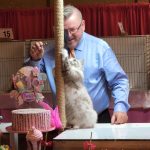