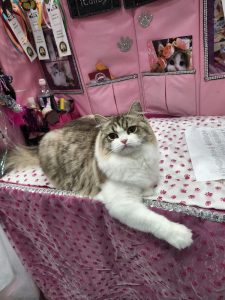 Last weekend, my friend Lisa and I packed up my Tahoe for a trip to New Hampshire in order to attend a cat show. It was RagaMuffin iCandy Raisinette’s first time out as a CFA grand champion and Lisa was looking for one point to complete her Oriental Short Hair Iceman’s grand premiership. The trip north seemed to take forever. The first half was raining and the second half was miserable traffic. Being able to share the driving made it much more bearable.

On Saturday morning we drove to the venue for the Seacoast Cat Club show. I’ve never been to this show before. It’s in a large venue with good lighting and easy parking. I was told that pre-COVID the spectators came out in force. While we did have more spectators than I have seen since the shows started back up, I was told it was not what the club usually had. The show had invited exhibitors to bring breed booths. A breed booth is a banner or some sort of information area designed to educate the public about a specific breed. As RagaMuffin Cat Fanciers just completed a new banner, I volunteered to take it to the show and set it up.

Set up complete, the judging began. There were ten rings scheduled in two days. Each ring has its own judge and each cat is judged separately in every ring. Raisinette had a good show. She was picked by each judge to be in the top ten. Two of the judges picked her as their best cat in the show; two picked her as their second best. Those were results beyond my expectations. The best part was how much Raisinette was enjoying the experience.

On Sunday, a breed presentation was scheduled. This is when various breeds are presented to the public, usually by a CFA judge, to talk about the origins and characteristics of each breed. I volunteered Raisinette to be used as the RagaMuffin example. When it was her turn, the judge handed me the microphone and gave me the opportunity to talk about my breed. It doesn’t take much to get me started talking about the cats I love.

Sunday evening, it was back to the hotel for mommy and me time. Lisa and I met for a celebratory dinner. Her Iceman had earned his grand and Raisinette had a great show. On Monday, the drive home was much easier.

I love to show my cats, spending time with other cat lovers and getting judges opinions of my cats for my breeding program. Raisinette makes her part of it seem so easy. The end result of last weekend was that iCandy Raisinette was second high scoring championship cat in show. WOO HOO! 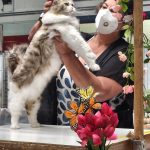 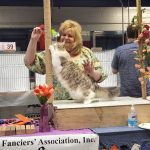 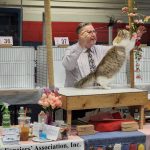 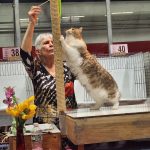 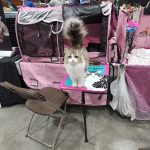 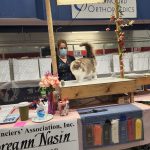 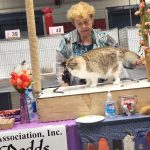 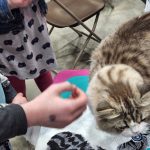 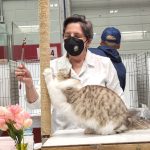 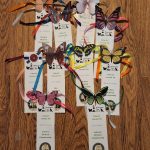 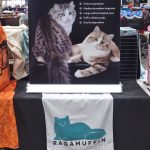 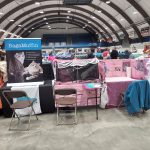