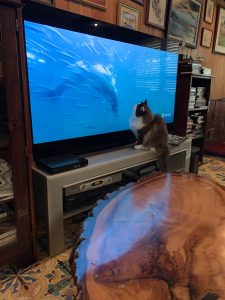 W is for him being an all around WONDERFUL kitty.

I is for him being very INTERACTIVE with our entire family.

N is for never needing to say NO to him.

D is for how well he gets along with our four DOGS.

S is for all of us being SPOILED having him and all our other pets to love.

O is for his confident OUTGOING personality.

R is for him being REALLY WONDERFUL!

Windsor is now a year old and has matured into a wonderful cat.  We are very pleased with how well he is doing in our home.  He is playful and active, but does not get into much kitten mischief.  For example, he does not get on our kitchen counters or our dining room table. I know this is because he is not a good jumper and cannot get there easily.  Actually, he can get on our kitchen table but so far he just doesn’t do it. Well, the truth is I did remove him from the kitchen table twice when he was very young but I did not scold him.  So I am truly impressed he hasn’t done it again.

We feed our cats in a bathroom and he rarely gets on the counter to eat without our help.  Actually, he can jump up to get there if he really wanted to badly enough but he is spoiled and prefers for us to pick him up and put him near his dish.  He eats next to our other cat.  They are pals and get along nicely together.  Windsor pays a lot of attention and watches everything our other cat does.  Especially, when it’s late at night then they often play with their toys and hang out together.  Windsor licks and grooms the other cat frequently.  He spends a lot of time grooming himself too.  Windsor also, spends a lot of time with our dogs and, of course with us. We often find him on a kitchen chair just hanging out with our four dogs. He occasionally, wrestles with one of our smaller dogs.  Sometimes, he cries when the dogs go outside.  He has followed them out a few times when he was younger but he has not gone out with them in quite awhile.  I am thankful for this.   He is still very curious about what the dogs do outside.  Of course, I quickly discouraged him from wanting to go out.  Occasionally, he watches them through the windows.  He also, snuggles with us and the dogs while we watch TV in the evenings.  He watches things move on TV too.  Sometimes, he sits on the TV stand and bats at the screen.  Our other cat will occasionally come in the family room. He is much more cautious of the dogs and rarely joins us in the evenings the way Windsor does.   I am thrilled to say Windsor sleeps with us some at night. Our dogs mostly sleep in crates in our bedroom. Our other cat rarely gets on our bed so it is extra special having Windsor joins us to sleep. He likes the special bed we got him.  It is tent shaped and we call it “the cave”.  It thrills me to see him curled up in it.  All our pets look forward to their bedtime treats.  Windsor runs with our dogs to our bedroom anticipating his share of their night time snacks.  Windsor eats his on our bed because he cannot jump up on my dresser where our other cat gets his treats.  Sometimes Windsor tries to pull the dogs treats out of their crates. He is a clever fellow.  I don’t really like that he does this but I do think it is funny, and it is amusing to watch him work hard to pull the treats out of the crates.

As you may have noticed Windsor has a lot of dog like behaviors but he is truly all cat.  In the early mornings I often find him sitting in our bedroom window watching the birds and squirrels eating out of our bird feeders.  He intensely watches their every move.  Most mornings he enjoys assisting my husband when he is tying his shoes.  They are very cute together.  Somehow, he knows when it is Monday mornings when we are changing our sheets.  Usually, by the time the fresh bottom sheet is on the bed he jumps right in the middle of the bed while we make the rest of the bed with him still laying on it. I cannot help but wonder how he figures out when we are changing the bedding.  Sometimes, he likes to get into small spaces like bags and boxes. He even went into a bucket one time.  He comes when called like a dog but like a cat he often flops just out of reach so we have to go the rest of the way to get to him.  As you know these behaviors are very typical for most kitties.

Windsor is friendly and outgoing but cautious when people first come in our house.  He watches from a short distance away when they first arrive and seems to size them up.  He does not like loud noises so if people come in loudly and very excited he waits back till things have calmed down a bit and then he greets them and wants to be petted.  When it is just us he usually meets us at the door right away when we come in from our own outings.  Typical of RagaMuffins he does not like us to leave our house.  He usually lies near the front door waiting for one more chin scratch before we leave.

His favorite thing is to be petted and have his chin scratched. Most cats seem to like being petted for only a short amount of time but he likes it more than any cat I have ever had.  He pushes at my hand demanding a lot of attention.  He likes me to stroke his forehead and wipe out his eye gunk.  He is one of the cleanest cats I have ever known.  He is constantly grooming himself and is very good at using his litter box.  He watches me clean it and seems to supervise me when I am working on it.   Trimming his nails is easy. He stays nice and still while we clip them.   He was not a big fan of being brushed.  This was my fault because I did not groom him enough when he was less than six months old.  So then I started brushing him more often and in shorter increments so he would get more comfortable with it.  I tended to always be in a hurry so I probably pulled his coat a little harder than he liked.  I was trying to brush him too fast.  Since then, I have been grooming him more often, and more gently.  He is cooperative and tolerates being brushed.

Windsor is fascinated by dripping water.  He likes to watch me brush my teeth and take a bath.  He almost always comes in the bathroom when I am in the tub.  I get a kick out of his funny facial expressions when he sees water moving.  If I sprinkle him with a little water he immediately licks and grooming himself to get rid of it.

My favorite thing Windsor does is what my vet calls the “RagaMuffin /Ragdoll Flop”.  When he wants to be patted he just drops down and stretches out for belly rubs and attention.  When he was a young kitten getting his vaccination booster he even did it on the exam table right after the vet gave him his injection. That is when my vet called it the “RagaMuffin Flop”.   After that, I promised Windsor I would always pet him when he does his flops.  He follows me all around the house throughout the day and frequently flops so I will pet him and I gladly do it.  He also asked to be petted by gently putting his paws on my leg so I will pick him up. I love this gesture of his and I think he only does it to me.  He even stays with me when I vacuum the house.  He is my pal.  I have enjoyed spoiling him and could not be any happier in how well he has adjusted to our home and family.  We have had several other wonderful cats (and a few not as nice) throughout the years and Windsor is already on the top of our wonderful kitty list.  So far, he has no bad habits and there is nothing we want to change about his behavior and personality.  Sometime we call him Win or Winner because he is a winner to us. We know Windsor will be a joy to have around for many years and yes, he really is a wonderful kitty.