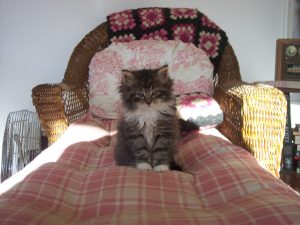 Giblet was sixteen years and four months old when I said goodbye to him today. I was up during the night with him with an apparent cardiac episode. I loaded him up on pain medicine because I wasn’t ready, even though in my heart, I knew he was. It was hard. Really, really hard. But, I made a commitment in my profession and as a pet owner to relieve suffering. And I followed through with that commitment.

Giblet wasn’t always an easy cat. As a matter of fact, he was the subject of a blog 8.5 years ago as my problem child. (https://ragamuffinkittens.site/2013/08/17/giblet-my-problem-child/) . Reading this blog now, I realize how much he changed since then. For one, while he was never a bestie with any of the other cats, he did mellow with age. The other fact is, he adjusted to the cat yard and cat towers and enjoyed them. One thing that never changed was the fact that he was a sprayer. That fact alone puts him in the category of not such a perfect cat.

I owe Giblet. As stated in my previous blog, I got Giblet at a seriously dark time in my life. He was a light in a black tunnel. I’ll never 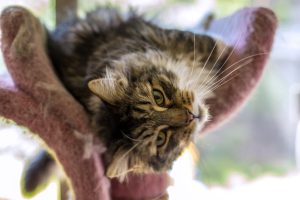 forget that. I’ll miss his kneading and purring. People think of me now as having pedigreed cats. There was nothing pedigreed about Gibbie. It never mattered. I’ve had non-pedigreed cats my entire life. The bond is every bit as special.

Giblet’s mother died about about a month ago at the farm Giblet was born on. I’d say they both had a good life. Giblet’s older half sister Petals remains on my couch much like the throw pillows. The balance in the household will change as it does with the addition or subtraction of any residents. Gibbie will be missed.