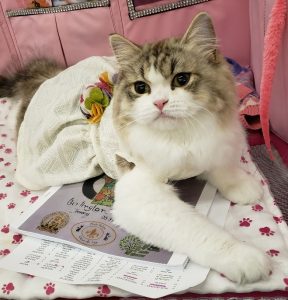 In the cat show world kitties can be shown in kitten class from the day they turn 4 months old through the day before they turn 8 months old. Since 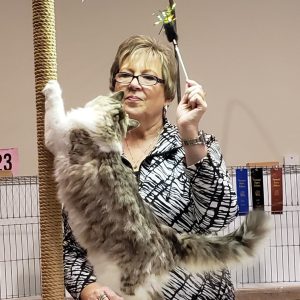 Raisinette was born on 5/17, it means that she will age out of kitten class today!

The top 25 kittens in each region at the end of the season are awarded a title, Regional Winner or RW. Raisinette has been in the top 25 and has remained in the middle of the pack, so to speak. But, since I don’t fly around the country every weekend ( and, yes, there are people that do) I pick and choose my shows to try to stay closer to home.

One show I had always heard about was the show in Vermont in January. Other exhibitors were very much fans of going to Burlington. It’s a hotel show, which is nice, especially in the middle of winter. Once there, cats and their staff don’t have to go outside all weekend. And, the hotel is a nice hotel.

I looked at the numbers. While Raisinette was at a solid rank, it was still possible for kittens younger than she is to score points in the time left in the season (end of April). I considered a drive to Vermont to try to score some final points for my RagaMuffin. I don’t like to drive far, especially by myself. That’s when I decided to contact some of my cat show friends that would be taking a similar route to see if we could  carpool.

I was in luck. Friend Lisa was considering going to the show. So, a week ago Friday, Lisa drove to my house, we added her cargo to my Tahoe and off we went to Vermont. It was a long drive, but having company made a big difference. Lisa’s two Oriental Short Hairs and my RagaMuffin were excellent travelers.

We arrived at the hotel well after dark. Unloaded the car, checked in and went to our rooms to get our cats and ourselves settled in. On Saturday morning the cat show start was delayed until noon due to weather, so there was plenty of time to set up our show tents and relax. 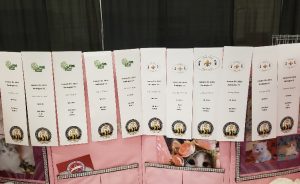 Other good friends were there as well. Our cats were “benched” close together, which means we can set up the cat tents and all our stuff and chat with each other all day! All of us had a good show on Saturday. Cats did well, the judges were generous and after the show we took our cats to the rooms and met for dinner.

Sunday was a repeat of success. Raisinette continued to charm both the spectators and the judges. At the end of the weekend she was awarded finals in 11 of the 12 rings. Mama was proud. And she had her photo taken by dozens of spectators and other exhibitors.

Monday was the drive home. Lisa and I were tired as were the cats. When the points came out, RagaMuffin iCandy Raisinette had scaled up the rank and I feel pretty sure her RW is in the bag. At least I hope it is. But more important….we all enjoyed the weekend with our cats and friends.