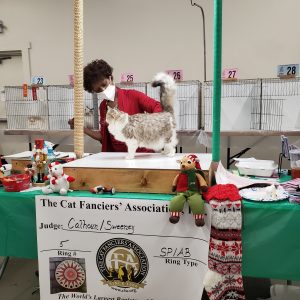 It was the typical cat show in Morgantown, Pennsylvania. A venue full of cat lovers vying for judges’ points for their beloved kitties. I brought three RagaMuffins with me to show. iCandy Jolly Rancher was in championship class; iCandy Raisinette and iCandy Toffee Crunch were in kitten class. Raisinette was my big hope for the show. She has been plugging along collecting points in extremely tough competition.

At a show, after being judged in a class, the cats (or kittens) return to home base, otherwise known as the benching area to hang out, have a snack or a nap, or for my kittens, get dressed in some humiliating costume. As owners, that is where we spend time with our friends chatting. After being evaluated by judge Kathy Calhoun, Raisinette and Toffee went back to just relax. The show went on. The judge had almost 60 kittens to examine before choosing her top ten favorites for “finals”. The final is what every exhibitor wants. That is the goal at a cat show. So, meanwhile the show goes on in other rings with other judges. I am called to ring one with Jolly Rancher. While waiting his turn to be judged, the announcement is made that Kathy Calhoun has made her choices for her kitten final. The kitten numbers were called and, alas, no number 26, Raisinette. Oh, well.

The numbers were repeatedly called for ten kittens. Apparently, a Maine Coon kitten was not showing up. In that case, the judge can void the placement or choose another cat. In this case, the judge chose another cat. The call went out for RagaMuffin kitten number 26 to come to the ring. My ears perked up and I hustled over to the benching area and grabbed Raisinette for her unexpected final. When I approached the ring for the final, the crowd waiting started clapping ( I assume because they were waiting so long). So, I felt the inexplicable urge to hold Raisinette like Simba from the Lion King. And, that’s what I did. I couldn’t help myself. Fortunately, the judge and spectators got the joke and laughed. If they hadn’t, well, I’m sort of used to people not understanding my humor.

The only issue now is that every time I go to a ring for a final, I expect applause.