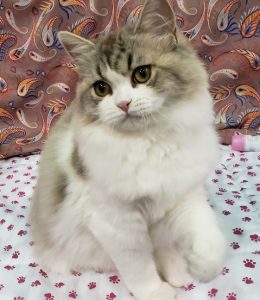 Last weekend I took a trip to Atlanta for the Cotton States cat show. I’ve always heard what a great show it is, but have never made it there. I decided 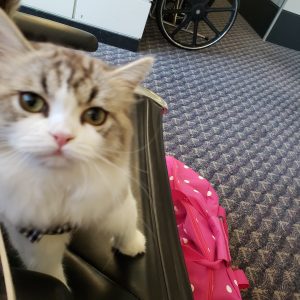 this was the year to go.

A cat show friend (and fellow veterinarian) was going as well. We made plans to meet at the Atlanta airport to share a rental car. I made motel reservations and entered the show with my kitten, iCandy Raisinette.

I’m not a frequent flyer to start with and certainly not with cats, although I have done so a few times. I carefully planned what I needed to take on the plane and what had to be checked. Took a deep breath on the Friday before the show, gave RagaMuffin Raisinette her pre-show spa treatment , carefully tucked her into her hot pink Sturdi carrier and off we went to the airport.

While Raisinette has been to a couple of shows and even a hotel stay, the airport and flight would be a whole new experience. She was absolutely amazing. Nothing phased her a bit. Of course, Allentown is a small airport, but I was still pleased with her ability to take security, boarding, and the entire atmosphere is stride…no big deal. Not a peep out of her on the flight.

When we arrived in Atlanta, we worked our way through the crowds to pick up our luggage and meet friends Noelle and Bobbi. Between the flight, the crowds, the escalators and the train, most cats would be in melt down mode. Not baby Raisinette. Meetup done,  we all loaded in the car and traveled to the motel. 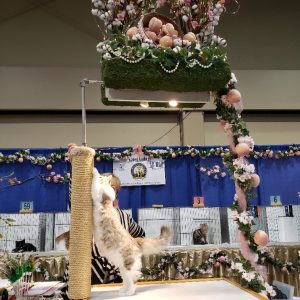 showing off in the peach ring

On arrival in our room, Raisinette made herself at home, used her potty and ate dinner and settled in to sleep. Saturday morning we were up and bound for the show. The venue was decorated beautifully with each ring representing something of Georgia, from the salt marshes, to peaches to Savannah. I benched next to a Persian friend who provided lots of laughs for the weekend. Spectators were allowed at the show and Raisinette was happy to greet them.

Raisinette handled the judging as well as or better than any RagaMuffin I have ever had. She nuzzled some judges, ran up the pole for others. She played at her benching area and just generally had a good time. It’s what every exhibitor wants for their cat. She won best RagaMuffin kitten in seven out the eight rings of the weekend and got a specialty final. There were 116 kittens entered. Very tough competition. I might have liked for her to win more finals, but I could not have asked for a better cat. Needless to say, I am one proud cat mommy.

Sunday after the show, we made the trip back to the airport, through the mobs of people at security. By the way, the kitty has to be carried by hand through security. With Raisinette, it was just another activity for the day. She was, as the saying goes, as good as gold.

As with any adventure away from home, coming home has its rewards. RagaMuffin Raisinette was happy to return home as was I. 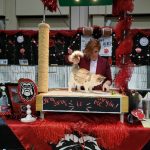 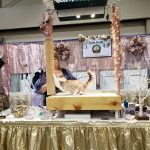 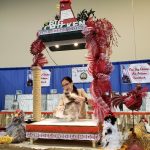 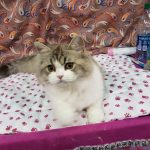 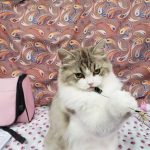 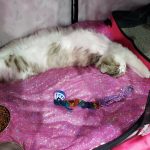 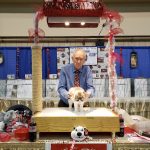 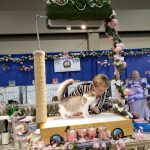 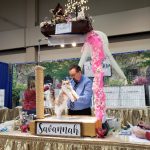 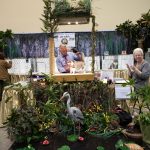 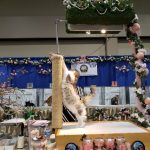 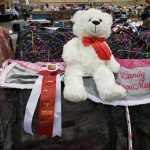