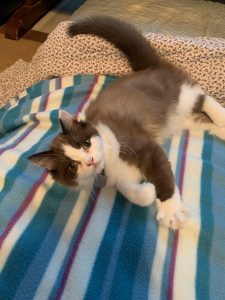 We have only had Windsor (iCandy RagaMuffin’s Solo and Kahlua) for less than three weeks but in this short time he has captured our hearts more and more each day, and seems to have a power over all of us.  My husband, Les, and I have 4 dogs and another cat.  Plus Claire, our niece, lives with us while in college.  I believe the five hour drive home from Sara’s house helped him get used to me.  I kept him in a carrier but for most of the trip I had one hand in it petting him.  I admired how soft his coat felt while remembering the information I read about RagaMuffins saying their coats are like rabbit fur. While driving he never seemed worried during the ride to our home. Upon entering he briefly met our other cat Seth (a 11yr old Norwegian Forest Cat) at the door.  Seth looked at Windsor and just ignored him.  As we came in Windsor could hear all the dogs barking as we walked through the house.   Again, the RagaMuffin kitten did not seem at all alarmed at the noise our dogs made.

As Sara had suggested we kept Windsor in a quiet room for a few days to settle in.  We chose our sunroom so he could easily see in several windows and watch what we were doing.    At first, I thought he might want to hide but he was curious about everything and proceeded to explore the sunroom.  I camped out with him for the first four nights. On the second day I opened two of the windows just a little so all the pets could look and easily smell each other.  Our dogs were very interested in meeting Windsor.  They put their paws on the window ledge to see him.  Sometimes they were all safely nose to nose through the window.  This was so cute.  After a couple of days I brought each pet in one at a time to meet Windsor.  He lay in a chair while greeting each one.  He instinctively seems to know not to move too fast around the dogs. He is one smart RagaMuffin.

After a few days he seemed eager to get out of the sunroom.  At first, he ran up and down the hall.  I figured he had a bit of nervous energy to release.  He followed me everywhere and played with many of the toys I have around the house for him.  He checked out the other litter pan we keep in the bathroom.  I showed him where his food would be. Everything went fine.  He explored more of our house the first few days than I expected.  Nothing bothered the RagaMuffin kitten.  He quickly learned to come when called.  Most of the time, our dogs do not have the run of the entire house.  During the day they stay in our kitchen, family room, and utility room.  As Windsor explored, he went in the kitchen on his own. When he chose to get on the floor around the dogs he would just lay down near them.  He seems to know not to run when near them.  Our other cat skitters around the dogs so they will chase him a little.  They have yet to chase Windsor because he moves slowly when near them.  He is very wise and gets under furniture to help protect him from all of their noses touching him.  He does show the dogs his paw and they greatly respect his claws.  It is funny watching a 40lb dog back away from a 4lb kitten laying on the floor hissing once.  The dogs are very curious and they seem  intrigued by Windsor.  He cannot yet jump up on all of our counters but he finds ways of getting where he wants to.  Our one rule for our cats is to not get on our kitchen table or stove counter.  He is learning this already.  We are all amazed at how brave he is.  Nothing bothers him.  If he seems a little nervous I speak gently to him and he recovers quickly.  He seems to trust me and I hope I never do anything to ruin his trust in me.

We have lived in this home for 22 years.  Windsor showed us something we did not know about our kitchen.  He was lying under a counter edge and Claire asked if he could get in it somehow and I said “no”.  I was wrong.  It is hard to explain but in an instant he was somehow under our oven.  We discovered a gap between the cabinet edge and floor; we did not know it had a gap up under there.  It was no problem.  He came right out but was still curious about the opening so Les glued a board under the edge so he could not get there again. In another week or so we figured he would be too big to fit in the space. It was funny and a little scary to watch him squeeze under there.  We were worried our new RagaMuffin kitten could somehow disappear under there and go who knows where.

Of course water is always fascinating to a kitten.  Windsor has been very interested in the tub when I take a bath.  I made sure he was safely staying on the edge.  One night he followed Claire to the bathroom while she took a bath.  She was being careful too, but as the water drained he could not contain his curiosity anymore and jumped in before she could stop him.  Most of the water had drained away and Claire quickly rescued him so his legs were just a little wet.  He was not traumatized as the next time I took a bath he sat on the tub edge again.

Besides being brave and fearless I am constantly amazed at how affectionate, attentive, and loving the RagaMuffin kitty is.  We have never really had a lap cat but Windsor will curl up and nap in our laps.  He sleeps most of the night with us on our bed and during the day he likes to be picked up and carried around.  If he is not napping he is constantly watching what we are doing.  One day when I was going out he looked at me as to say “where are you going and how could you possibly leave me”?

Another thing that I enjoy about Windsor is he is so proud and confident that his tail is almost always sticking straight up like a flag pole.  As I understand, this means cats are happy.  His tail is usually so stiff that I chuckle and tell him “I am going to hang a small American flag on his tail”.

Every day we have new stories to share about something we have observed Windsor doing, while exploring or playing around the house.  He is a gem and keeps us smiling.  If most RagaMuffins are like him I wish I had discovered this breed years ago.  Sara obviously breeds and raises wonderful kittens and I know we will enjoy every day with Windsor as he continues to learn new things and grows up.  Thank you, Sara for our wonderful cat iCandy Duke-of-Windsor.  We love Windsor and you too.