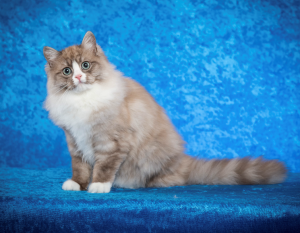 RagaMuffin Brulee was due to have her kittens on Monday. This was her third litter. The last litter produced six kittens with no issues.  She went through the day hanging out around me. A couple of times she climbed into a birthing box on her own. Around 7 pm she had her first kitten and was content cleaning it up and nursing. And then I waited.

I was expecting three or four kittens, so I waited not so patiently for contractions to resume. Time crawled by. It is not unusual for a cat to take a break while giving birth. The feline uterus is constructed of two horns. I thought maybe the first RagaMuffin kitten was produced by one horn and the others were lining up in the second horn. Brulee was very comfortable, purring and enjoying her newborn. I was worried.

By early morning, I was concerned there could be a serious problem. This was my first potential animal emergency since selling my veterinary practice. I knew Brulee needed a radiograph to confirm the presence of kittens still in her uterus. I contacted a local veterinarian who is a good friend and who is now my animals’  veterinarian for anything I can’t take care of at home. Fortunately, Brulee was able to have her x-ray done locally; she had two unborn kittens remaining.

Next step, I called the veterinary reproduction practice I have a relationship with to make an immediate appointment for an ultrasound to evaluate the kittens’ condition.I drove Brulee and her newborn kitten down to the repro practice an hour away. Poor Brulee, as soon as she gets in a car, she starts drooling profusely. I was pretty sure that in sixty minutes her carrier and her baby would be covered in slime.

My sticky cat and I were taken into the hospital quickly. The veterinarian came in for her exam. She purred the whole time. When placed on her back for the ultrasound, she continued purring while the fetuses were evaluated. Good news, they were both alive with good heart rates. Discussing options, I decided on a Caesarian section as I was concerned both mom and babies could deteriorate with waiting.

So, I left my sweet blue eyed RagaMuffin in very capable hands for surgery. The time went by and I got a call from the surgeon saying all went well and Brulee had two more squirming kittens. 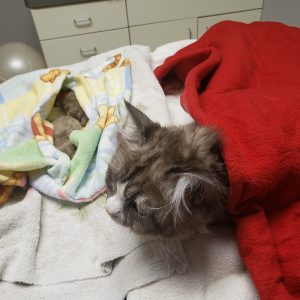 When I went back into the veterinary hospital, I carried with me a dozen doughnuts for the team that cared for my kitty. I was reunited with Brulee and her kittens in an exam room. Brulee’s IV was running, she was awake, but a bit groggy. I was allowed to remain with her while the two newest kittens got their sea legs under them and had a nice first meal at the milk bar.

I packed all up in the crate and drove the new family home.  I settled them in to their cozy den and then, rewarded myself with a nap after my sleepless night. 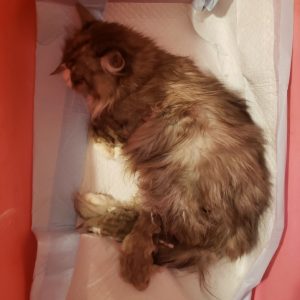