The Great Kitten Search started this past spring.  I had decided to go through a breeder after having some mixed results at the shelters.  Over the years, we’ve had a variety of cats ranging from an old battle axe who (barely) tolerated humans and dogs to a sickly cat who died too soon.  We also had a few good ones in-between.  My hope was to find a kitten who enjoyed playing with the kids and could roll with the happy chaos that is our family life.  A bonus would be to find a friend for our sweet Goldendoodle Barley.

I went to Google and typed in “Best Family Cat”.  The RagaMuffin led the way as a great breed for families and it sounded perfect for us.  I found iCandy Ragamuffins and Sara rather quickly.  Her commitment to health had me sold.  I contacted her and we hopped onto the waiting list.

As Sara warned us, waiting was the hard part.  To pass the time, we made a countdown calendar and created a list of possible names that the kids quickly and firmly narrowed down to Sir Gilbert.  We excitedly scrolled through her Facebook page gushing over the pictures families shared of their beautiful muffins.  We couldn’t wait to be a part of it!  Sara’s kitty supply suggestions were very helpful and we gathered all sorts of items from this list, and we had fun choosing toys too.  When the day finally arrived, I walked into Sara’s home and felt immediate joy.  RagaMuffin mamas and kittens of various colors confidently strolled over with a greeting.  Their bottle brush tails stood tall in welcome and I heard soft purrs as they each sought out attention, which I excitedly dished out.  Sir Gilbert was sleeping upstairs and when he came down, I could see he was a bit nervous.  Sara created such a cozy world for him, and I understood his nervousness about leaving.  My heart sank a little at this thought.  Sara must be a cat whisperer because she softly spoke a few words to him, and he immediately relaxed.  I’m not exaggerating; there wasn’t another peep from him!  Excited faces peered from the car windows as I carefully guided his carrier to the car.  I dare to say my husband looked excited too.  Sir Gilbert was on his way to his forever home, and I was confident that he would love it and us!

When we arrived home, we took him directly to the quiet room we prepared for him, filled with cushy beds, food, water, and his litter box.  Instead of the plush new beds, he beelined for an open plastic tub sitting on the floor.  We laughed a little over his pick and we tucked in a warm blanket to help him feel cozy.  Barley was allowed to do some supervised sniffing.  She approached gently as I’m sure she recalled her previous attempts at befriending our old battle axe and the swipes across her muzzle for even casting an eye towards the cat.  But there was no need for caution this time around. RagaMuffin  Sir Gilbert (quickly shortened to Gilly by those insisting on the long name!) appeared at ease with our giant dog.  In fact, he approached and nuzzled Barley’s face, weaved in and out of her legs, and attempted to groom her tail.  My heart soared, already knowing a friendship was to come!

Time is flying by and Gilly is a big boy now at six months old, weighing over 8lbs.  Life is so much fun with him.  When he’s not being toted around by the kids, he’s chilling on their desks during virtual school, or cozying up to one of us.  He plays fetch!  He walks around with toys in his mouth and brings them back for more tosses.  He loves his scratching post and enjoys scaling the side to grab a toy off the top.  I think Barley is a bit envious of his skills.  Gilly loves to race around the house, playing chase.  I call him the thundering hooves as he gallops and leaps across the floors, and then zooms up and down the stairs in a blur of fur.  He comes when I call, and he sits outside the pantry, awaiting treats with Barley, his best bud.  He’s mischievous, spunky, curious, and a love bug.  I recently broke my foot and was down for the count for a bit.  My first night home he curled up next to me, put his paws between my arms and lulled us both to sleep with his RagaMuffin gentle purring.  My heart melted.  We are celebrating the twelve days of Christmas with a new toy for him each day.  Gilly spends hours playing with them.  His personalized stocking is hanging alongside ours over the fireplace and there are already gifts for him under the tree.  We’ve only had Sir Gilbert for 3 short months but it feels like he’s been in our hearts for much longer.  He is the perfect fit for our family! 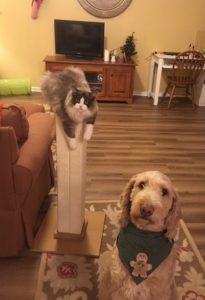 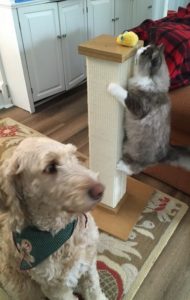 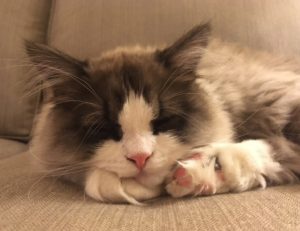 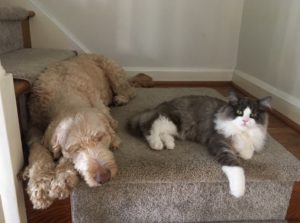