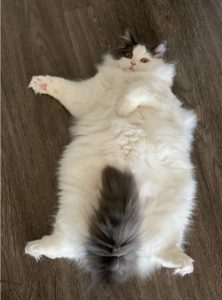 healthy kittens, three boys and three girls. I had the fourth and fifth picks of the litter, so I knew that the chance of getting two sweet girls would be slim, but I had already named them: Nutmeg and Clove. Elegant, classy and still along the sweet names that the iCandy parents already had, these names would be perfect.

Right before COVID-19 caused the massive lockdown, I had decided to take a break from the stressors of college to go backpacking and would be out of contact for weeks. I also knew that in this time the opportunity to individually pick out the two kittens I had put in a deposit for would arise. In preparation for my trip, I had given my mom as the contact for breeder Dr. Thornton to reach out to when the time was right. So, when news came – and pictures along with it – that I ended up with the last girl and the boy that caught my mom’s eye, I soon forgot the “perfect” names I had chosen because those two pictures already had me grinning from ear-to-ear. 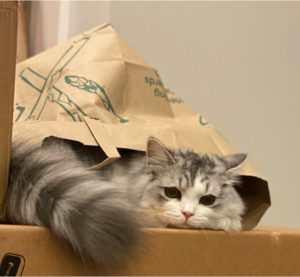 I found myself in the Utah desert with just the bare essentials, cat pictures, and a predicament: what do I name my new RagaMuffin kittens? I quite literally hiked for days saying “nutmeg” and “clove” out loud to see if I could force either of them to be more masculine with no luck. So, I resorted to making lists in my journal of traditionally human names, play on words, and other food-oriented names, but nothing fit quite as I wanted it to. I looked at their pictures asking myself, “what do they look like?” Still, nothing was working out the way the two more feminine names would have.

Thankfully, I had lots of time on my hands for the foreseeable future on this adventure I 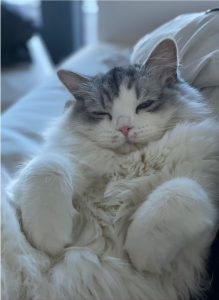 was on. I reflected on times with friends and family and landed on a story that my parents mentioned a few times throughout my life. In this brief anecdote from my mother’s childhood, I was told about a couple who were family friends with my maternal grandparents. These two often went to the beach house on the weekends in the summers with my mom’s family and were always a joy to be with. What always stood out to me about these friends were their unique nicknames: Killer and Lovey.

Killer, who was always described as a big man with an even bigger personality, was close with my grandfather, who we called Daddy Don. Killer called his doting wife Lovey, an undeniable juxtaposition. I do not remember the exact moment when I realized this pair of names would perfectly fit my pair of kittens, but I do know that meeting them only solidified my choice to call them Killer and Lovey.

Lovey is brave, playful, and curious almost to a fault. She looks at humans with loving

eyes and is always the first of the two to make a move to meet new humans, explore a new habitat (drawers, paper grocery bags, luggage, etc.), or take the first bite out of a fresh bowl of cat food. Killer is a big boy, shy, and cuddly after dark. He loves his belly brushed and can often be found lounging on his back whether he’s under the bed or in the middle of the kitchen.

Neither RagaMuffin can resist a peacock feather or a Churu lickable treat. They are two compassionate, intuitive buddies who rely on each other for entertainment, playful brawls, and warmth to cuddle up close with.

Though many people at first are confused when I talk about my cats or they meet them, the irony of their names still makes me giggle. These two have been my solace in what continually proved to be a challenging year. They always remind me to laugh, to connect to my environment, and most importantly, to take time to appreciate what and who I have in my life. 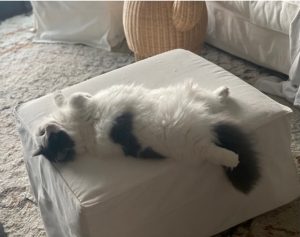 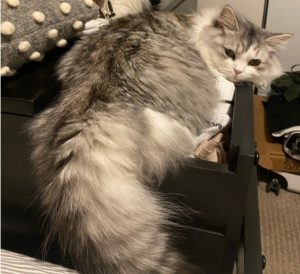