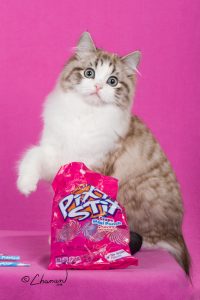 Occasionally I am asked about the origin of one of my RagaMuffin’s names. It’s simple…..they are all named after something sweet. I think it is appropriate, as nothing is sweeter than a RagaMuffin.

It all started with my very first RagaMuffin, Bon Bon. He was a sable boy that quickly became the apple of my eye. My second RagaMuffin was Nougat, another  confection. When I decided to breed RagaMuffins, I needed a name that would convey the luscious nature of the breed as well as the stunning looks. Eye Candy came to mind. It seemed to be perfect.  A suggestion from a friend made the final version iCandy.

Lots of syrupy identifications of cats have been utilized since then. Some are immediately identifiable like Ganache, Beignet, Fudge Ripple and Blueberry Crisp. Others are brand names like Rolo, Pixi Stix, Bitahoney. Sugar Daddy, and 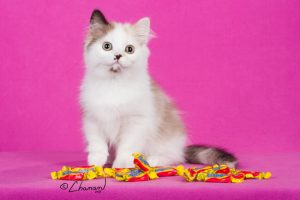 the cat. The photographers have gotten used to me walking up with a cat in one hand and candies in another. In Fanny Farmer’s case, I bought a vintage Fanny Farmer candy box off of ebay and fake 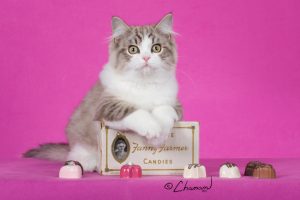 chocolates to place around. In Willy Wonka’s case, I found Willy Wonka printed wrapper to put on a piece of cardboard.

Why do I do it? It’s fun. Names are perfect for the RagaMuffins and, after all, who doesn’t love something sweet?