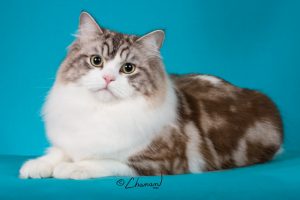 My heart ached last weekend. GC BWR RW iCandy Fudge Ripple, aka Fudgie, went to his retirement home. He has been with me from birth. He is my first home grown Grand Champion, Regional Winner and National Breed Winner RagaMuffin.  I thought he would be with me forever. I had planned on it.

But as he matured, he seemed overwhelmed by the other cats. He didn’t want to spend time with me as he had when he was younger. If my lap already had a cat, he would walk away. Fudgie is a BIG boy. He could easily push other cats out of the way, but that wasn’t his nature. I began to wonder if he needed more than I could give him.

His show career has been over for quite a while and his breeding career was concluded as well. Around the first of the year, I began to think that maybe I needed to find the perfect home for him to spend the rest of his life as the center of attention. My spirit sagged thinking about it.

It is THE hardest thing to consider as a RagaMuffin breeder and pet owner: what is in the best interest of each animal. I finally came to the conclusion that Fudgie needed his own family where he could be the focus of all the love.

So, once I decided it would be best for him, I had to set the parameters of the perfect home. I wanted it to be a family within easy driving distance. No long trips for my Fudgie, also known as Fudgsicle. Also, no young children as I am sure the activity would disturb him. And, I preferred he be the only cat or one of two.

As it turned out,  the people that have Fudgie’s brother had good friends that were looking to add a cat after their Ragdoll passed away. I consider  people who have one of my RagaMuffins part of my extended family. In this case, not only are they RagaMuffin family, they have also been veterinary clients of mine for over thirty-five years. It seemed karma was good to all of us. Fudgie got a loving family home where he could be the king and I got reassurance that he would have a wonderful retirement.

P.S. My most recent update was that the new mom and Fudgie were sitting on the floor together so she could read to him.