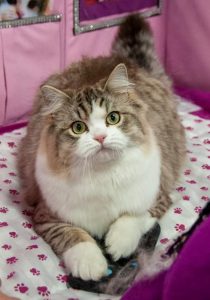 ICandy Fanny Farmer turned eight months old on February 4. This means she graduated to championship class in CFA cat shows. She was so much fun as a kitten to show, bringing the party with her every time. I was really looking forward to the next step of her career.

The first time out was at the very competitive Black Diamond/Ramapo show. She earned well over half of her points toward her Grand Championship. Even better, Fanny continued to enjoy being judged. The very next weekend was the large National Norwegian Forest Cat show. She had a good time and earned more than enough points on Saturday to be a Grand Champion.

Needless to say, I was delighted. The tradition at a cat show is to shout “New Grand” when the judge hangs the ribbon that gives the cat the final points needed. I yelled, other exhibitors cheered and I got to to give my precious kitty a treat and a hug.

Fanny was a two show grand, meaning it only took her two shows to earn the points required for the title. That’s a significant accomplishment. What makes it even better is the realization that with Felisophic Sugar Daddy and Gentlepurrs Solo Purrsuit, iCandy has titled three grand champions in three months!