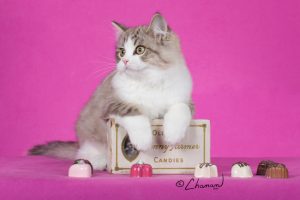 RagaMuffin kitten iCandy Fanny Farmer is six months old now. As a small kitten she had “the look”. As she grew, I became more convinced that she would have what it takes to be a show cat. At her first show, she was relaxed in the atmosphere, did not mind the handling by judges, and had a good photo session with cat photographer Chanan

Her second show was the Cat Fanciers’ Association International show in Cleveland, Ohio. It is a huge venue with tons of spectators and noise. For Fanny, it was no big deal. She even managed to do some winning at her young age.

These days, Fanny is a full fledged show kitten. Honestly, it is such a joy to take her to a show. She handles the bathing and blow dry like a pro (which most are pretty good about). The venues don’t phase her with all the noise and people. She even spends much of her time in her show tent kneading the bed.

And when it comes to judging, she is amazing! I put her in the show cage behind the judge’s table. Fanny sits alert in the front, sometimes playing paws with the kitten next to her. She tries to knock her number down on top of the cage, rolls around and generally has a good time. When the judge takes her out to put on the table, she is a party girl, climbing the pole, standing up on her hind feet to catch the toy, or leaning on the judge’s chest. It just doesn’t get any better.

Most of my show cats have been lazy, not nearly as interactive with the judges. It really is fun to see Fanny Farmer put on a show. 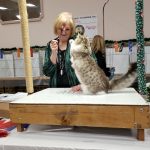 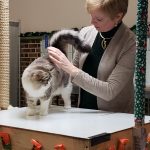 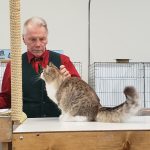 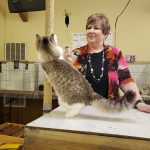 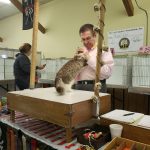 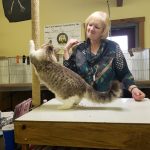