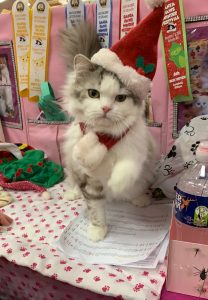 Last weekend was the annual Santa Paws CFA cat show in the Baltimore, Maryland area. I go to this show every year, not because I expect to win a lot as it is a tough show, but because it is a fun time.

I enjoy hanging out with friends, cheering each other along. The show hall is festive with Christmas decorations. There is always an awesome raffle to buy tickets for. Simply put, it is an enjoyable weekend with cats.

I took both my young adult Solo and my kitten Fanny Farmer to compete. Both girls are a pleasure to show. They have fun between rings waiting to compete. They play or nap or even, in this case get dressed in holiday outfits.

When it is time for judging, I carried the kitty whose turn it is up to one of four judging rings. I placed her in a cage behind the judging tables where she waited until it was her turn. Both Solo and Fanny were relaxed, looking out of the cage or playing with the number over the top of the cage.

The judge evaluated the cat in each cage behind him/her in order. Both Solo and Fanny are happy campers when they get on the table. Both are party girls. They play with any toy the judge offers, they climb the sisal covered pole and in general, strut their stuff.

Solo went into the two day show with 99 points. She needed 101 more to earn her grand championship. I knew it was possible, but unlikely due to the high quality of the cats that would attend. Saturday started off with her getting called to finals in the first couple of rings where she earned points. In four rings on Saturday, she finaled three times.  I added up her points (yes, there’s an app for that) and realized it was still possible for her to get to 200.

Sunday started out well. In true dramatic turn, it was down the wire at the last ring for the weekend. Solo needed to final and earn 12 points. I used the app to figure out she needed to win either 1st place long hair cat or top three of all breeds. She was called to the final. Whew. Next step….find out how the judge placed her. And…..she gave her best long hair and 3rd best all breed! Gentlepurrs Solo Purrsuit of iCandy was a Grand Champion! My friends were cheering for her and even other exhibitors that I do not know were enthusiastic in their congratulations.

To top it off, Fanny had a great weekend in kitten class. She finaled in seven of eight rings, even under judges that are not traditionally keen on the RagaMuffin breed. The published results were out this morning. She was third overall out of a large entry of 56 kittens! To say I was happy with the results would be understating it.

The best part? Bringing those joyful kitties home and having them snuggle up with me last night. 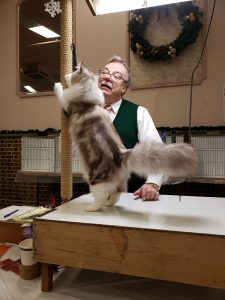 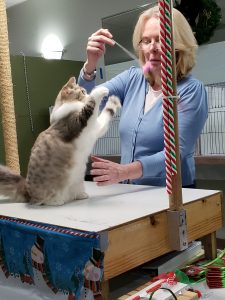 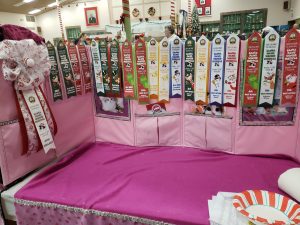