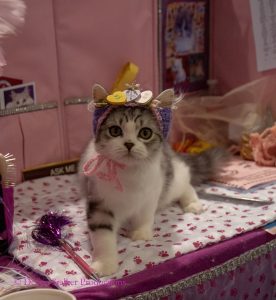 Last weekend I drove to Maryland with three RagaMuffins to show. The show was at the fairgrounds, so I stayed at the Red Roof Inn. I stay there every time I go to this venue as it is close and, of course, allows pets. To say it is not luxurious would be correct. But, it is handy.

All three cats got through their bath and blow dry in preparation for the weekend. The drive down was uneventful with Sugar Daddy, Solo and Gertrude Hawk.  The motel check in went smoothly. The night did not. Sugar Daddy wouldn’t shut up He has been to motels numerous times, but this time was different. I seriously was afraid another guest would complain about the cat meowing and I would get a call to get him out of the room. I didn’t know what I would do with him. I guess we would both sleep in the car?

We got to the show Saturday morning a bit sleep deprived. I set up my benching area, and put the cats in their places. As Gertrude just turned four months, it was her first show. She seemed to take the busy, loud atmosphere in stride. No big deal. That’s a relief, as one never knows what a cat will do in that situation. Both Solo and Gertrude were in kitten class. Solo beat her little sister in every ring. That was not a surprise as Solo is older and more mature. What was a surprise was how well Gertrude handled being judged. She acted as if she was an old hand at it. I was thrilled.

On Saturday, I had two extra items to check off my list. The first was getting Gertrude’s baby picture taken by the professional photographer. That went well. I think she had a good shoot. Then I wanted to take Solo to the agility ring since she did so well the last time. She did well enough running the course this time, but not as well as before. This time she was more of a real cat. Run through an obstacle, take a break and lick a paw, then go on to the next one.

Saturday night was not as bad, although Sugar Daddy did some singing,  we both managed to get some sleep. Sunday at the show was more successful under the judges, with Sugar Daddy making progress toward his grand championship and both kittens getting points from the judges. I ran Solo in agility again and decided to give Gertrude a shot. While she did not break any records, she did manage to get through the course and get on the score board.

As always, I enjoy time with my friends and my cats. I meet members of the cat loving public and even have a reason to dress my cats up for the spectators to take photos. I don’t think Sugar Daddy will be attending any more motel shows in the future, but I think he’ll be OK with that.