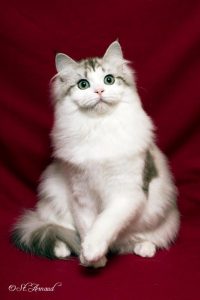 The last half of the 2013/2014 cat show season was busy six months for me at the cat shows. I missed the first half of the season, but then took out my Grand Champion, Kaerik Canterbury Nougat as a premier. Premier is the category at cat shows that is made up of the spayed females and neutered males. While this division does not have the high quantity of cats that are in other divisions, it has a high level of quality as only the best cats go on to compete in this group. In addition, Nougat’s son, Ganache, made his show debut in the kitten class. Kittens may compete from four to eight months of age.

It was a successful six months spent traveling to shows, spending the days cheering on my cats as well as friends’ cats. One of the things I like about the cat shows is the time I get to spend with other cat people. We all have a common interest, if not a common breed. I often set up my cats near friends with Persians. We help each other get to the rings on time, chat between judging, and, occasionally, go to dinner in the evening.

When the season was over and the results were tallied, I came home with a plethora of ribbons for both kitties! 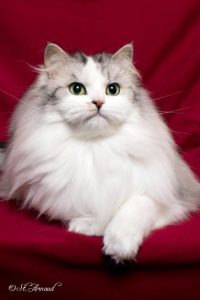 To put it mildly, Mama was proud of her boys. It can be hard on cats to travel around like they did. I could tell they were getting tired despite having short breaks. It was time for a longer break. One of my rules was and is that the cats have to come first. While I love the competition and spending time with my friends, I have to be sure my cats are in good health mentally and physically. My obligation as a pet owner is to ensure my cats have good lives and that I make good choices for them.