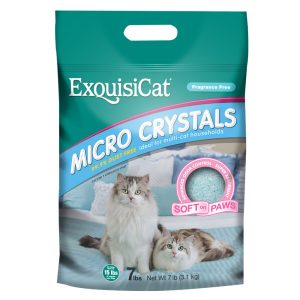 Some years back, I took RagaMuffins Ganache and Nougat to a photo shoot  for litter packaging. I checked regularly to see if the litter was out and was just about ready to give up. Then, I saw litter packaging that had two cats similar in looks to mine with a similar background as our photo shoot had. I was disappointed as it appeared that the packaging was redone using different cats. I thought my babies were dumped.

Months later, I was surfing the Internet and just decided to take one more look. And there they were! Their picture was on the microcrystal version of the same litter as I had seen previously! Sooooo, I spent the remainder of the evening texting and emailing everyone I know. My friends and family are good sports. No one replied “so what?” My Yahoo groups cat lists were very gracious with the news.

The main thing I remember about the shoot is how much time was spent rearranging pillows. The end product does show the pillows, but was all that time really worth it? To this day, I don’t believe it was.

Nougat and Ganache continue to be on the packaging. They have no clue about their current status in the marketing world. If they did, they wouldn’t care. I really do know that. I guess I am just a terrible stage mom. They still nap in the same places, play with the same toys, and tolerate their crazy cat lady owner.

Recently, my brother started a retirement job at PetSmart, the store that sells the litter. So, if you are in Charlotte, NC and some guy is telling you the names of the cats on the package, it is likely to be true!