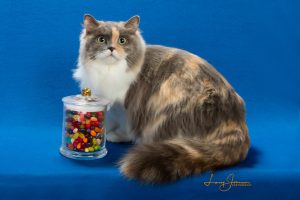 It was a good weekend at the cat show in the Philadelphia area. My eighteen month old RagaMuffin Jelly Belly was very close to earning her CFA Grand Championship after her last show. Her career had picked up speed recently and she had earned quite a few points in the last couple of shows.  The goal of this weekend was to try to earn her last few points for her title. She managed to do that, plus some.

Jelly Belly is a beautiful blue cream sepia and white female with an amazing plush coat and striking green eyes. Both of her parents are Grand Champions.  Jelly Belly’s claim to fame among my friends at the shows is her weight. Jelly Belly does not have the trim, athletic physique of many show cats. She is well….chubby. She determined long ago she was going to live up to her name.

Despite the extra weight, she charmed many judges into giving her the points she needed. She did occasionally get a judge comment something to the effect that she must really like to eat at Cracker Barrel. Today, after earning her title yesterday, one judge sincerely congratulated her on the judging table, then followed up by asking if she had celebrated by eating a cake. OK, he insulted my cat, but, it was really funny!