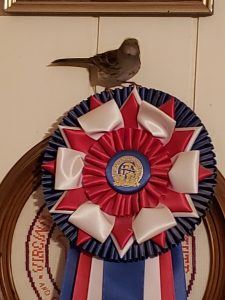 As I do most nights, last night I was sitting in the den on my computer waiting for time to feed the horses. My youngest RagaMuffin Sugar Daddy went running across the room looking up. Another cat did the same. I looked up as well, knowing that it was probably going  to be something I was not going to like. It was a finch. In fact, while I do like birds, I do not like them in my house, mostly because of the path of destruction the cats leave when trying to catch them.

I have a fenced in yard for my RagaMuffins and rescue cats. On rare occasion, something is carried into the house via the small cat door. Apparently, tonight it was a little bird. My guess is that in announcing the prize, the kitty let go of the bird and away it went to roost on my ceiling fan. From there it went on top of the heating unit, multiple pictures, rosettes and round again. Meanwhile, more cats are gathering and making attempts at retrieving the bird. I never see that many of my cats in one room at the same time. Even Squidgy, who is notoriously reclusive came out to participate in this game.

So, I made a try at capturing with my bare hands. No go. Then I got a box and tried to trap my feathered friend under it. Didn’t work. Finally, I stood with a broom and waited. The bird was getting tired of flying around. It flew into a resting spot and missed and fell on the floor. I swooped in with the broom and secured it. I was able to pick it up. It seemed OK, other than being stressed and tired. I then returned it to the great outdoors to fly away. Cats were disappointed, but got over it quickly.