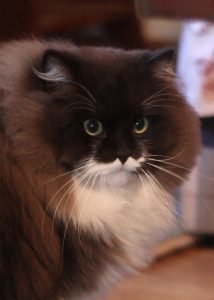 When I turned 50, I decided I wanted a purebred cat for the first time in my life. I had rescues over the years that were beautiful, wonderful cats, but I wanted a cat bred for specific looks and temperament.  I chose the RagaMuffin breed and waited two years for my kitten. Kaerik Rags Bon Bon of Canterbury came from a reputable breeder. He was an adorable package of fluff and attitude. I visited my first cat show with a friend to see what it was like. Having shown horses and dogs, it did not take much for me to get the bug.  I entered my first show with Bon Bon. With help from his breeder, I learned the intensive grooming procedure that was required. It paid off. My sable with white boy won a Best Kitten in Show under one judge. I was thrilled! And hooked!

As I was new to this activity, I sought out mentors in the show world. I learned so much from other exhibitors. They were always extremely supportive and helpful; Persian, Burmese, Household Pet, American Short Hair exhibitors were always around to help me.  My next show cat was Bon Bon’s son, Kaerik Canterbury Nougat. From the start, Nougat was an exceptional show cat. He won Best Ragamuffin Kitten in Show at the ACFA RagaMuffin National, his 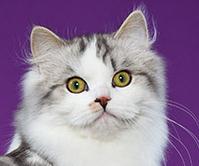 first show. He continued on in CFA shows to Grand Champion, Breed Winner, Grand Premier of Distinction and multiple Regional Winner. Now that Nougat is retired from the show ring, he makes nursing home visits and continues to be a fabulous pet. Every now and then, I dust him off and he goes to a show as a Pet Me cat for spectators and to show in Veterans class.

After Nougat’s success, I have had other cats that continue to keep me going : Ganache, Buttons, Fudgie, Pixi Stix to name a few. I knew a lot about cats before I started this; I have learned so much more. Do you have any idea how complicated cat colors can be??? That in itself is a significant challenge! It has been an interesting journey, making new friends, learning new skills and most of all, enjoying cats.