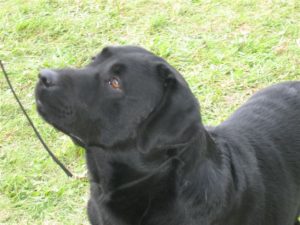 I remember the first time I saw him. It was at a Labrador show in Charlotte, North Carolina. I watched this magnificent black dog trot across the ring with his breeder. He moved effortlessly and took my breath away. I turned to my friend sitting next to me and said “now that’s MY kind of dog!” I looked him up in the catalog and made a mental note to remember this outstanding animal.

Fast forward 18 months. My friend and Labrador mentor Ron went to Ohio to pick up a yellow male he was buying. When he came home, he had two dogs, the male he had been waiting for as well as the big black dog I had seen in North Carolina. I had told him about Champion Borador’s Mr Wizard and he was able to convince the well known breeder to part with  him!

After bringing Wiz to Pennsylvania, Ron offered me the opportunity to co-own this wonderful dog. I was thrilled to say the least! I showed Wizard regularly. He did his share of winning, but honestly, while he was a great dog, he was not a great show dog. His heart wasn’t in it. We retired him from the ring. Ron certified him as a therapy dog and took him regularly to nursing homes for some time. That was Wizard’s forte.

You see, Wizard had a kind and gentle nature. He never got excited or out of control. He was a peaceful dog that simply loved to be around people. When he was at the hospital with me, staff always knew where they could find me because the big black dog would be sitting at the door of the room I was in.

In retirement, Wizard lived with Ron and his wife Jean. Born on Christmas Day, he had turned thirteen on his last birthday. On Friday, October 3, we said goodbye to a dog with a soft, sweet soul. Thanks for the memories, Wizard; it was an honor to be a part of your journey.